skip to main | skip to sidebar

Happy New Year to all, and to all a good night 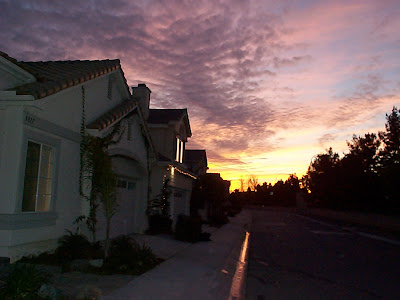 The last sunset of 1999, on the street where I live. A lifetime ago.

This will be this blog location's last post. You are invited to join me at my new blog, Beyond Hollywood. I've provided a link, to the left. Thank you.

It has been a saving grace of this past year that I've met some amazing new friends here. I'm grateful to you all.
Be well, good people. I hope we can all keep believing in our republic and one another, throughout this new year and beyond.

As I toil to complete my novel, my little blog is being neglected, sorry to say. But here is an on-point article I want everyone to read, a piece far better, with better examples, than I could have cobbled together even if I had the time:

This is a subject that has bothered me for a long time: Hollywood's unchallenged distaste for suburbia and normalcy.

Thank you, and I'll see you soon.

Great article with a title so perfect I've appropriated it to use here. Read the article:

your humble correspondent (drinking hot cider; we had frost this morning here in SoCA)

How oft Columbus, dreaming of Cathay,
In the night's shadow, lost upon the sea,
Doubting the stars, and fearful of the day,
Wept in the cabin of the Saint Marie.
All was uncertain then, and only he
Leaned on his sails and fed them to the spray,
Spreading the waves before him at his knee,
Drawing the winds behind him on his way.
And shall we then who steer a sturdier bark
Across obedient seas from pole to pole,
Or climb the sky on errands like the lark,
Turn in despair from yet a worthier goal,
And crying,
All ahead is death and dark,
Miss the remoter heavens of the soul?

* * *
I ran into the above poem this morning while beginning my research for an essay.

Robert Nathan wrote a novel in 1928 called The Bishop's Wife, made into a film by the same name in 1947. This film will be the subject of my essay.

Nathan was the author of a number of works including Portrait of Jenny, another novel turned into a film on my personal classics list. A haunting and sentimental supernatural drama, Portrait of Jenny (Jennifer Jones, Joseph Cotten) was released one year before The Bishop's Wife. Both films were shot in glorious black and white.

For reasons that will eventually be clear, my wish is to review The Bishop's Wife and discuss it in a cultural context. The film is timely because it is a Christmas story; its pertinence, however, goes beyond that.

It is usually classified as a romantic comedy, yet what lingers in modern memory are the inspirational moments and messages, the quiet dignity of the performances, and perhaps, a poignant sense of loss.

Here is the thesis of my essay:

There are many notable qualities to films of the 1940s. Not the least of these is the obvious and correct presumption made by filmmakers of that time that their films’ audience consisted of a single national culture, people who shared an overall-- but still fairly specific-- set of values and beliefs. That such a film as The Bishop’s Wife would never be produced by today’s Hollywood is a powerful statement about how far we’ve come as a nation… and not for the better.

It is my belief that while we may have lost the innocence required to produce a film such as The Bishop's Wife, I cannot accept that the heart and wisdom behind such a film is gone forever.

I'll let you know when and where the article is available online.

In Christmas cheer, I remain your humble commentator.

Posted by brenda cox giguere at 11:46 AM No comments:

Note to friends: Link to my new Blogspot

Welcome. I'm getting things going at a new blog, my new online home.

Beginning very soon, I will do all my posting at a new blogspot called Beyond Hollywood.

Here is the link:

The original blog will remain open as an archive of posts, with all internal and external links kept active, but anyone wanting to stay in touch should replace their blog link with the above new hollywood goes conservative address.

The media have done a great job of representing the views of an opinionated minority, while the rest of us often feel like outsiders in our own culture.

Imagine if that were to change...

Posted by brenda cox giguere at 9:51 AM No comments:

The only quote we really need

This quote is lifted shamelessly and gratefully from a blog I just ran into called Monkey in the Middle. I've been pulled in quite a few directions lately and haven't been blogging, but I wanted to take a minute and share this timeless wisdom:

You cannot help the poor by destroying the rich.
You cannot strengthen the weak by weakening the strong.
You cannot bring about prosperity by discouraging thrift.
You cannot lift the wage earner up by pulling the wage payer down.
You cannot further the brotherhood of man by inciting class hatred.
You cannot build character and courage by taking away men's initiative and independence.
You cannot help men permanently by doing for them what they could, and should, do for themselves.

And to All a Good Night

Email forwards: we all get them. Some are meant to be funny, many are designed to be inspirational or even serious.

The funny ones, the cartoons and photos-with-captions, are the online equivalent of the photocopied wit that gets taped up in the office lunchroom. At their worst, email forwards can be puerile or even offensive, but more often they are neutral, predictable, well-meaning.

Some questionable email forwards, when of interest, might have us stopping over at Snopes or the equivalent for a quick check of its online provenance. Then we get on with our day.

Generally speaking, I skim these kind of emails very quickly. It's not that I resent getting them; I remind myself it's good to have friends who think of me now and then, even if it's just because I'm on a list.

Yesterday, I was emailed a poem about Christmas that was supposedly written by a Marine. I have no idea if this is true, but it doesn't really bother me if someone merely wanted it to seem that way.

My closest friends know I'm a soft touch for patriotism, Christmas, and our fighting men and women, and while this poem is unlikely to win a literary award-- which isn't the point, anyway-- I think it's worth sharing with you folks:


TWAS THE NIGHT BEFORE CHRISTMAS,
HE LIVED ALL ALONE,
IN A ONE BEDROOM HOUSE MADE OF PLASTER AND STONE.

I HAD COME DOWN THE CHIMNEY WITH PRESENTS TO GIVE,
AND TO SEE JUST WHO IN THIS HOME DID LIVE.

I LOOKED ALL ABOUT, A STRANGE SIGHT I DID SEE,
NO TINSEL, NO PRESENTS, NOT EVEN A TREE.

NO STOCKING BY MANTLE, JUST BOOTS FILLED WITH SAND,
ON THE WALL HUNG PICTURES OF FAR DISTANT LANDS.

WITH MEDALS AND BADGES, AWARDS OF ALL KINDS,
A SOBER THOUGHT CAME THROUGH MY MIND.

FOR THIS HOUSE WAS DIFFERENT, IT WAS DARK AND DREARY,
I FOUND THE HOME OF A SOLDIER, ONCE I COULD SEE CLEARLY.

THE SOLDIER LAY SLEEPING, SILENT, ALONE,
CURLED UP ON THE FLOOR IN THIS ONE BEDROOM HOME.

THE FACE WAS SO GENTLE, THE ROOM IN SUCH DISORDER,
NOT HOW I PICTURED A UNITED STATES SOLDIER.

WAS THIS THE HERO OF WHOM I'D JUST READ?
CURLED UP ON A PONCHO, THE FLOOR FOR A BED?

I REALIZED THE FAMILIES THAT I SAW THIS NIGHT,
OWED THEIR LIVES TO THESE SOLDIERS WHO WERE WILLING TO FIGHT.

SOON ROUND THE WORLD, THE CHILDREN WOULD PLAY,
AND GROWNUPS WOULD CELEBRATE A BRIGHT CHRISTMAS DAY.

THEY ALL ENJOYED FREEDOM EACH MONTH OF THE YEAR, BECAUSE OF THE SOLDIERS, LIKE THE ONE LYING HERE.

I COULDN'T HELP WONDER HOW MANY LAY ALONE,
ON A COLD CHRISTMAS EVE IN A LAND FAR FROM HOME.

THE VERY THOUGHT BROUGHT A TEAR TO MY EYE,
I DROPPED TO MY KNEES AND STARTED TO CRY.

THE SOLDIER AWAKENED AND I HEARD A ROUGH VOICE,
'SANTA DON'T CRY, THIS LIFE IS MY CHOICE;

I FIGHT FOR FREEDOM, I DON'T ASK FOR MORE,
MY LIFE IS MY GOD, MY COUNTRY, MY CORPS.'

THE SOLDIER ROLLED OVER AND DRIFTED TO SLEEP,
I COULDN'T CONTROL IT, I CONTINUED TO WEEP.

I WEPT FOR HOURS, SO SILENT AND STILL
AND WE BOTH SHIVERED FROM THE COLD NIGHT'S CHILL.

I DIDN'T WANT TO LEAVE ON THAT COLD, DARK, NIGHT,
THIS GUARDIAN OF HONOR SO WILLING TO FIGHT.

THEN THE SOLDIER ROLLED OVER, WITH A VOICE SOFT AND PURE,
WHISPERED, 'CARRY ON SANTA, IT'S CHRISTMAS DAY, ALL IS SECURE.'

ONE LOOK AT MY WATCH, AND I KNEW HE WAS RIGHT.
'MERRY CHRISTMAS MY FRIEND,! AND TO ALL A GOOD NIGHT.'

I'm an embarrassment to Barack!
I only scored 16 on the Obama Test

blogs and sites I find of some interest...

a little about the proprietor